A review of Paying Mr. McGetty (2017) A Traditionz Entertainment Production 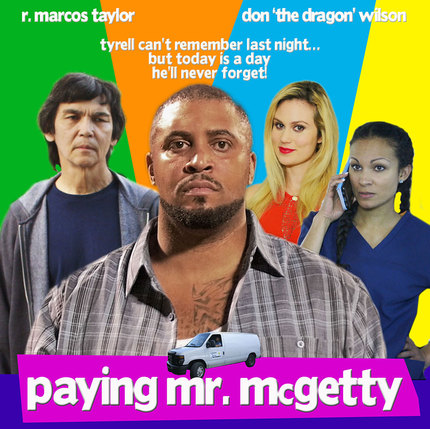 Paying Mr. McGetty opens up in a plush hotel room with the protagonist Tyrell (R. Marcos Taylor, Luke Cage, 48 Hours to Live) waking up after what is assumed a wild night gambling and drinking. To add to the fog in his mind, there is a beautiful woman laying in the bed next to him named Cecelia (Alissa Schneider, Wick City Rockabilly, October Rodeo) who explains what happened the previous night. After a phone call from Tyrell’s angry girlfriend Meena (Anita Clay, City of Gold, Adrenaline III), Tyrell and Cecelia exit the hotel, both parting ways with a friendly kiss.

What was meant to be friendly turns out to be detrimental to Tyrell’s safety for the rest of the day. It turns out that Cecelia was not only the daughter of a mob boss but was engaged to a crime lord, Rocco. One of Rocco’s men obtain photographic evidence of the friendly kiss and sends it to Rocco, starting a series of unfortunate events.

With Rocco’s men after him, Cecelia’s father sends Shota Kabu (Don “The Dragon” Wilson, Diamond Cartel, Beyond the Game) a highly-skilled hitman after him, as well. This is on top of Tyrell’s duties as an entrepreneur and dry clothing delivery driver. As he makes his rounds all over town, he dodges Shota, Rocco and his men, and his girlfriend, who reminds him constantly of the threat of being thrown out of their home unless they pay their landlord (Mr. McGetty) by the end of the day.

As the movie progresses, Shota develops a conscience in the affair and gets to the bottom of the job he’s on. In the end, with Meena in danger, Tyrell must reach back into his memories and harness his long-lost passion of martial arts in order to defeat Rocco and his men. With an unlikely ally, Tyrell prevails and arrives home to his girlfriend who welcomes him with gracious arms.

Overall, Paying Mr. McGetty is a light-hearted action-comedy that stands out in today’s martial arts movies. It serves as a light contrast to the darker world we live in, where trouble could be coming from any number of places. While Tyrell does get into some trouble with the mob, it reminds us that if we stay true to ourselves and our passions, we will turn out alright in the end.

Don “The Dragon” Wilson is an exquisite addition to the already great cast of characters. While he may not look like your typical action star, he delivers in the film. Wilson uses his decades-worth of real world martial arts skills to present smooth action sequences that are both believable and fun to watch. The director, Michael Baumgarten (The Martial Arts Kid, Finding Noah), blends all this into a delightful presentation, complete with a robust soundtrack from various artists including Kanye West.

Paying Mr. McGetty would be a fantastic addition to any movie collection.

Do you feel this content is inappropriate or infringes upon your rights? Click here to report it, or see our DMCA policy.
action-comedyDon "The Dragon" Wilsonmartial artsMichael Baumgarten