Review: DEVIL IN THE DARK, Ultimately Scary and Admirably Evocative 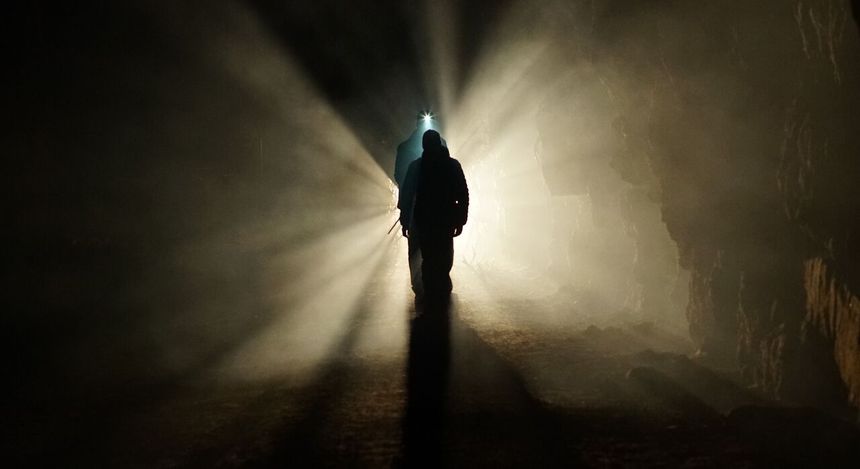 British Columbia, my home province, is a wild and mysterious place. There's Vancouver, its largest and best-known city; its capital, Victoria; and a smattering of mid-size to small towns scattered here and there. Beyond that, the entire massive thing is essentially just an endless stretch of mountains and forests.

Anyone who's flown over it, or drifted up its length by boat, can start to feel overwhelmed and small. Living in the city, I rarely if ever get very deep into the woods; as a result, they're full of intrigue and allure for me. And as a horror fan who thrives on eerie atmospheres, the idea that unusual things lurk within them is one to which I can all-too-eagerly ascribe.

B.C.-set Devil in the Dark, then, had its work cut out for it. The premise is relatively standard -- two very different, distant brothers attempt to reconnect on a hunting trip -- but the deep, dark woods setting is one whose depths may never be exhausted by the horror genre.

The brothers in question are Adam (Sanctuary's Robin Dunne) and Clint (Dan Payne, Star Trek Beyond). Clint was, and continues to be, the more ruggedly masculine of the two, making him a perfect fit for their small hometown, which dedicates itself to hunting, camping, and the command of various all-terrain vehicles. Adam's affinity for comic books, respect for the life of all living things, and general aversion to the outdoors set him apart from his brother and their father since childhood. Eventually he moved to “the city,” and hasn't looked back since.

When we catch up to these two as adults, Adam has begun having strange dreams about the forest where he once camped with his brother and father as a child. The film's opening shows that he once saw something moving between the trees when he was separated from his family, though he has no memory of what that thing might have been.

Based on these troubling dreams, soft-edged city boy Adam uncharacteristically plans an arduous and extended hunting trip with Clint, who has grown into a Canadian Paul Bunyan and is all too happy to oblige. Devil in the Dark doesn't waste too much time filling in expositional blanks, instead allowing the brothers' opposing personalities to speak for themselves.

Of course, some locals also deliver the classic “someone disappeared up there once” speech, which is unoriginal, but not unwelcome. The mythology of the site needs to be established, after all, and it's nice to have some commentary that comes from a character other than one of the brothers.

What the film does best is establish that something is afoot, which it does fairly early into the brothers' hunting trip. Director Tim J. Brown (2007's The Cradle) seems to understand that while the siblings' dynamic may help us to invest in their story, the horror angle is likely why we're watching in the first place. And thanks to some very effective sound design, things ratchet up to an “oh, shit” level without much needless dilly-dallying.

Devil in the Dark is ultimately a scary, admirably evocative film that functions like top tier monster-of-the-week episodes on TV shows such as The X-Files or Supernatural, with the brother relationship and the appearance of recurring Supernatural castmember Briana Buckmaster on hand, the latter comparison is almost too perfect.

Brown executes the buildup, conflict, and climax with a winning combination of restraint and payback. As a horror fan, I seek out films that can provide enough palpable scares that the stakes are sufficiently raised, while still holding their cards close to their chest to allow for some mystery. Devil in the Dark doesn't try to over-explain its mythology, nor does it serve up a last-act revelation that undoes its previous scares. For this, it stands out in an increasingly crowded market and delivers what too few movies do: a tangible, memorable boogeyman.

Devil in the Dark is available on VOD nationwide in the U.S. from Momentum Pictures beginning Tuesday, March 7.

Do you feel this content is inappropriate or infringes upon your rights? Click here to report it, or see our DMCA policy.
briana buckmastercanadiandan paynedevil in the darkhorrorindierobin dunnetim browntim j. brown