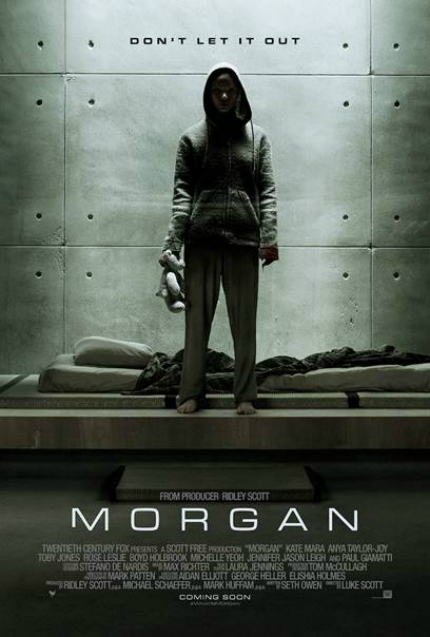 A trend I began to notice a few years ago with much of Hollywood film (and some independent American cinema as well) was a sore lack of good scripts. Not even outstanding ones, just good scripts with good dialogue and stories that made sense. Stories that were consistent, that created their own world with its logic and stuck to that logic. Were no screenwriters getting editors to make sure that, at the very least, the stories made sense? That the characters were consistent within themselves? This is one of the reasons I stopped watching most Hollywood films.

A case in point: Morgan, the feature directorial debut of Luke Scott, produced by Ridley Scott. With such a producer, a huge budget, and a cast that includes acting heavyweights Michelle Yeoh, Jennifer Jason Leigh, Paul Giamatti, and Toby Jones, there would be something to hold onto. But with an inconsistent story and a director unprepared for a film of this scope, Morgan fails to engage even as entertainment, let alone a story of substance.

Lee Weathers, a risk assessment specialist for a tech company, is sent to the country side where a division of the company has been 'raising' a part human, part science experiment young girl, Morgan (Anya Taylor-Joy), after she severely injured one of her carers (Jennifer Jason Leigh). The head doctors (Michelle Yeoh and Toby Jones), and her other carers, especially Amy (Rose Leslie), see Morgan as a person and are determined to see the incident as an accident. But Lee seems to think Morgan might be more dangerous than the others realize.

Morgan is the latest in a line of films that questions scientific intervention in human development, the creation is super-humans so to speak. There is no new ground being tried in this story (not that there has to be); but even its repetition of this theme might be forgiven is the story was interesting. Instead, what we are presented with is a paint-by-numbers story filmed in a badly painted-by-numbers way. This is a far more produced than a directed film, and what little direction there is, is fairly sloppy; at times, Scott attempts to show some foreshadowing or overt subtext through mirroring, or music and sound cues of foreboding, but these are either forced, or lacking in quality that I'm surprised no one fixed the problems. Even the 'twist' can be seen within the first few scenes, and its revelation to (presumably) nobody is anti-climactic.

As stated, the film has some high caliber acting talent; unfortunately, they are saddled with dialogue that is so stilted and just a tad too formal, and characters whose actions are illogical to their personalities. It seemed like both writer and director needed something to happen in a scene, and had a character perform said action or say said line, regardless of whether it made sense to their character or the story (as long as the action kept going). The actors are evidently trying their best, but even they can't save it.

One point in the film's favour is the number of women characters in the film, specifically in roles that in past films would be taken by men; more to the point, there is no question as to women being in these roles, or these women being intelligent (Yeoh as the head scientist) or nurturing (Leslie as the surrogate mother) or dangerous (Taylor-Joy) or cold and calculating (Mara). Unfortunately, the lack of attention to a consistent narrative, and the amateur detailing, means that Morgan fails both as thoughtful science fiction and as an interesting story.

Do you feel this content is inappropriate or infringes upon your rights? Click here to report it, or see our DMCA policy.
Jennifer Jason LeighKate MaraLuke ScottMichelle YeohMorganRose LeslieToby Jones