Review: CRD, An Ethereal Exercise In Art Vs. Artifice 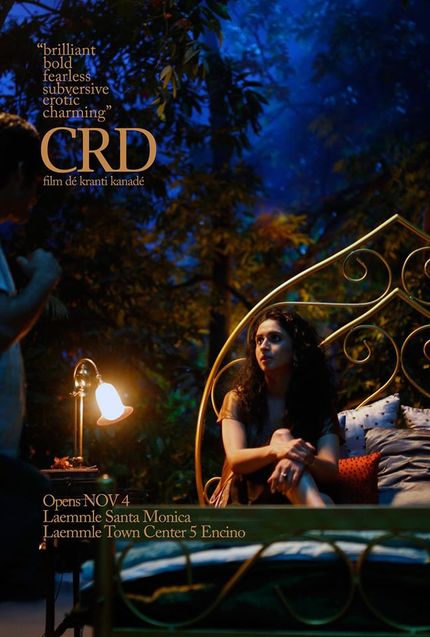 CRD is one hell of a feature from director Kranti Kanade. The film utilizes more film and theatrical techniques in its 100 minutes than most directors do in an entire career. The result is a project that can be difficult to grasp for those outside of the art world, but those with roots in the terra firma of the performing arts will find themselves entranced by its cringe-inducing familiarity.

At a performing arts college in India, the play's the thing as the titular Chetan Ranjit Deshmukh enrolls with eyes full of stars and a heart full of pride. Soon, however, he realizes that all life is pain and suffering and if he is going to become successful, he's going to have to do it without the help of the institute he now calls home. So begins a bout of guerilla warfare between Chetan and the theatre department's faculty advisor, Mayank.

A film set in the intense world of competitive collegiate theatre isn't going to be everyone's cup of tea, and the film is unabashedly focused on this small sliver of the creative experience, however, there are universal truths to be gleaned from CRD anyway. Chetan is forced to face his demons, both emotional and literal, in order to accomplish his goal. His biggest demon is the professor, Mayank, who uses his position of power within the school's leadership to attempt to break Chetan down to make him more malleable. His means are brutal and archaic, but they light a fire under Chetan's ass to make something happen his own way, and that's when the film kicks into high gear.

Even as CRD focuses keenly on the theatrical world, its execution is anything but theatrical. Kanade and his cinematographer Daniel Katz use every trick in the book to give CRD an incredibly cinematic look. Well placed lens-flares, extreme utilization of selective focus and bokeh as art, along with a combination of hand-held camera work and precisely staged setpieces with gel lighting schemes that would make Bava gasp are all an integral part of conveying to the audience the way in which auteurs like Chetan see the world. All the world is his stage, and the people, his players.

While the plot centers around the college's quest for the real-life Purushottam award for theatre, the film is more about who we are and how we react to a wall placed between ourselves and our dreams. For Chetan, the only solution is to keep on writing, keep on rehearsing, and to perform his play by any means necessary not because he deserves to, but because he has to or he will die. His ambition is noble, if a bit melodramatic, but what do you expect? He is a playwright after all.

CRD's greatest fault is also its greatest asset. Kanade's singular focus on this world of college theatre may alienate those unfamiliar with the competition that occurs between creatives, however, that same focus allows him to dig deep into the neuroses and challenges of the creative mind. The fact that he does it with such style is a bonus.

While it does feel as though Kanade threw in every trick in the book - possibly for fear of never getting to make another feature - in the end it does reflect the tone and theme of the film pretty accurately. Chetan is a man determined to achieve his goal, no matter what the cost, and as such he tries every trick in the book to make his big splash. Kranti Kanade does the same, and for him, it's a success.