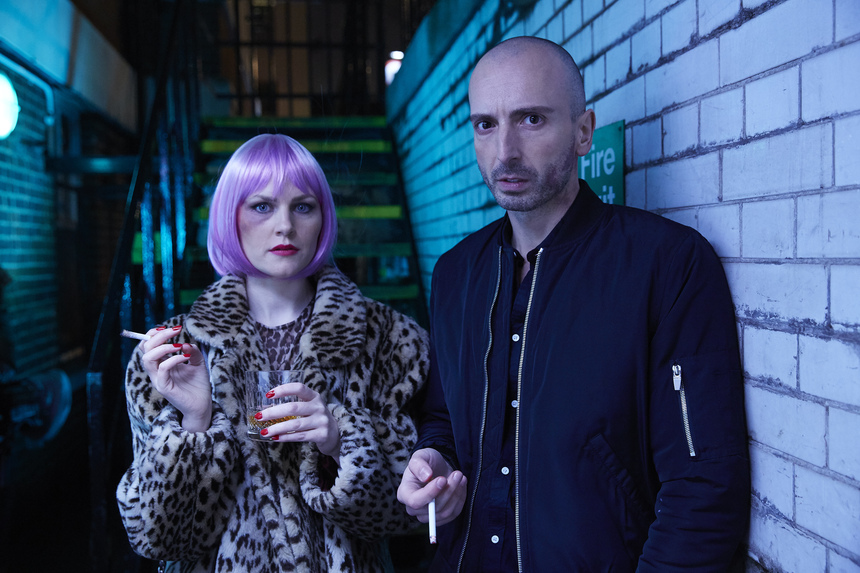 The San Diego International Film Festival kicked off this week and among the fantastic line-up is the intense and atmospheric thriller Red by Branko Tomovic (24, Fury, City of Tiny Lights), which also stars Dervla Kirwan (Ondine, Ballykissangel, The Silence, Doctor Who) and Francesca Fowler (Doctor Who, Rome, Closure). It's Branko's directing debut and tells the story of Niklas, a surgeon who lives a life of solitude and is tormented by self hatred. He performs regular illegal surgeries for the red market and works together with Mia, a young prostitute who lures her clients in and drugs them. Niklas is looking for a way out of this dark world, but owes his life to their violent crime boss Ed, who would rather kill him then let him go.

We caught up with Branko Tomovic for a chat about Red.

Congrats on getting selected for San Diego. Can you tell us how you came up with the idea for Red?

Thank you, we are very thrilled and excited to screen in San Diego. Their lineup of films is just amazing! Red is very dark and gloomy, shot in London in cold and awful weather, it's the opposite of what you get in sunny San Diego and California! Red is a dark thriller set in the underground world of illegal organ smuggling, you call it the red market. When you read something about the illegal organ trade it's usually from the victim's point of view. It's mostly cases of people waking up somewhere, not knowing what happened and then discover that a kidney or something else is missing. But I thought it would be interesting to tell the story from another point of view - the people who are involved in such operations. What would drive someone to do such a horrible thing and how they cope with it. You could be a victim of your own surroundings but that doesn't excuse the things you are doing, it's a very dark and brutal world. It's a character study of a damaged and guilt-ridden man who fell victim to the red market but desperately wants to leave all this behind him. I have always been drawn more to the darker side that you don't usually see on the surface so I thought this world with people like Ed, Mia and Niklas is very fascinating.

The acting is very strong in your film. Did your background as an actor help you to direct?

I didn't want to be in front and behind the camera actually. But we only had a tiny budget so it was just easier for me to do it myself when it came to shooting. As for the other actors, I think it always comes down to great casting. The character Ed, the violent and sadistic crime boss, was originally written for a man. Ed is the scariest person you’ll ever meet. Very intelligent and charismatic, a very important high-ranking figure in the organ trade. The puppet master who controls the fate of many lives. Very powerful with a cruel sadistic streak. I had Dennis Hopper's crazy character Frank Booth from Blue Velvet in mind when I wrote the script. But then I thought it would be much more interesting to have a woman play this part. We were looking for someone extraordinary with gravitas and outstanding talent - and Dervla Kirwan was the perfect choice to portray such an intense and charismatic role. She is an exceptionally gifted and brilliant actress, we were so lucky to get her. She is a big star in the UK and Ireland, you might maybe know her from Neil Jordan's Ondine, where she played Colin Farrell's ex wife. And our character Mia is played by the lovely Francesca Fowler who has appeared in Doctor Who, Rome, Closure, we worked already before together on another project and I thought she would be perfect to portray this character as it's very complex - vulnerable and ruthless at the same time.

You have worked with great directors such as Ken Loach, Paul Greengrass, Pete Travis and David Ayer. Did you get any advice on directing?

I was very lucky to have worked as an actor with these great filmmakers. They are all very different in their approach and the way they work, but what they all do have in common is that endless passion and enthusiasm for filmmaking and a very unique strong vision. And that I think is the most important thing for a director to have. You have to know the film already in your head and be able to communicate to your team what you are after. It's about team work and yet working towards one vision.

Your film looks very stylish, the colour scheme with only Red standing out and also the locations look really elegant.

The visual style was very important to me. The script was intentionally written to also offer great visual potential. From the metaphorical opening shot all the way to the intense climax scene. Edward Hopper's paintings (Nighthawks, Automat, New York Movie) were a big visual influence. Same as our film they show a certain loneliness and isolation in a big city. The visuals had to match the intense story and the dangerous and dark world the characters live in. In terms of colors, the idea was also to use faded colors only, apart from red being the only color that stands out throughout the whole film. The funny thing about the locations was that we were mostly filming in a real hotel that we got through a friend's connection. And the final scene is very complex, with even 5 actors in the room at one point. Without giving to much away, it's the climax of the film and it's very emotional, really intense and also violent- there is blood, guns, illegal operations and even a child in a suitcase -but the other hotel guests on the floor and also the hotel staff wasn't supposed to know what we were doing or else they would kick us out, so we had to do all that very secretly and pretend we were just having a meeting in the room.

You also just received a nomination for the Maverick Movie Awards 2016, and not just one - but in 8 categories! Congrats!

Thank you! It was really a nice and unexpected surprise to hear that we are nominated for the Maverick Movie Awards. Any award or nomination is always wonderful to receive, especially since our film Red was really a passion project, it didn't have a huge budget and everybody worked really hard on it because they liked the film, so it's always a great gratification to see that people respond well to your work and love your work. I have been told past MMA award winners include Robert Redford, Sophia Loren, Isabella Rosselini, Tom Berenger - that's definitely a great honour to be amongst such talented and respected filmmakers.

The film is quite bleak and dark,  but has a very serious subject matter. It's a very disturbing thought that humans are treated as disposable commodities. That everything you carry inside you can be taken out and sold off, the cornea from your eyes for example is very popular and expensive. Just imagine having that done to you against your will. So if it gets people talking about this serious subject matter that would already be a great start. You can also expect a masterclass from me in how to make a perfect surgical incision into someone's lower abdomen.

Do you feel this content is inappropriate or infringes upon your rights? Click here to report it, or see our DMCA policy.
Branko TomovicDervla KirwanFrancesca FowlerMaverick Movie AwardsSan Diego Film Festival