Interview: Bong Joon-ho Looks Back At MOTHER While Looking Forward To OKJA 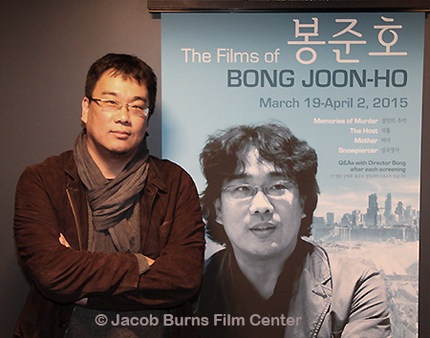 The Jacob Burns Film Center in Pleasantville, New York, hosted a 3-week long retrospective of the feature films of Korean auteur, Bong Joon-ho.  After the screening of the haunting Mother, remastered into black and white, Bong and producer, Choi Dooho sat down to talk about the retrospective, news on Bong's upcoming projects, and why, after Haemoo, he'll never produce another movie.

The Lady Miz Diva:  Thank you so much for telling me about this special screening of MOTHER.  Seeing it on the big screen in black and white made it feel like I was watching the movie for the first time.  It was even more powerful and engrossing.  What did it mean to you to transfer the film into black and white?

Bong Joon-ho:  It just started out of curiosity with my DP; what would it feel like as a black and white film?  Everything else - the sound and the editing - is exactly the same. So I was curious and that was the starting point of this transfer.  I'm not sure why, but when I saw the finished film, I saw different things in the performances, as well.  I'm not quite sure, but just little details came to the surface more. For the overall film, I felt that the black and white sort of focused your view of that.  So, if the government said, 'You have to pick one version over the other,' I would want the black and white one to survive. {Laughs}

LMD:  Will the black and white version get a theatrical release?

BJ-h:  It's never been theatrically rereleased, but there's a Blu-ray of this version, and it played at the Hong Kong film Festival, Mar del Plata and in Busan, and some cinematheques in Korea.  Small, small screenings.

LMD:  Talking of revisiting your work, we are here because this film is part of the big retrospective of your features.  I'm curious whether seeing these movies - some of which are now almost 12 years old - all together with an audience like this, made you compare Bong the filmmaker then, versus Bong the filmmaker now?

BJ-h:  It's hard to go back.  And I'm also worried about what it's going to be like for the next 15 years.  I'll leave it to my producers to think about.  I feel like I'm lost in the forest and trying to find my way back.

LMD:  Speaking of leaving things to producers, you are now a producer, yourself. {Bong produced HAEMOO, directed by his MEMORIES OF MURDER writing collaborator, Shim Sung-bo.}

BJ-h:  Thank you. Thank you for watching my last produced movie. {Laughs} It's definitely the last one.

BJ-h:  Because I am a very bad producer.

BJ-h:  I have to focus on directing.

LMD:  So, does having produced make you appreciate {Choi} Dooho more?

BJ-h:  Yes. {Laughs} It's a different dynamic.  I'm not good at saying no, and I feel like that's a big part of producing.  So, I'm always like, 'Yeah, let's do it. Let's try it.'  It's not good.  The schedule goes over, the budget goes over.  So, there was a lot of problems that came up during that movie. And it's just my personality; I don't enjoy meeting financiers.  I'm supposed to coax more from the financiers, and I'm not good at that. I just like to hang out with the crew on set and talk to them. {Laughs}

LMD:  SNOWPIERCER was a success and brought you to the attention of audiences worldwide.  Has that given you more options and openings to make a broader type of film, or broadened your vision of the type of film you are able to make?

BJ-h:  For me, personally, it's too early to say it like that, but for me, maybe, Snowpiercer will be the biggest budget movie in my lifetime.  It means I want to make smaller, smaller, smaller movies.  We are already preparing our next project, which is relatively smaller than Snowpiercer. Bigger than The Host, but smaller than Snowpiercer.  And there's another one that's even smaller.  The main thing for me is to be able to make the film that I set out to make, and to have that control; so going smaller is important to me.

LMD:  So there are two films in the works?

BJ-h:  Yeah, the others are kind of coming together, but this next project that I'm doing, that's the thing that I'm focused on primarily at the moment, and I just finished my first draft.  There's going to be some shooting in New York.  40% of the shooting is in New York, the other 60% is in South Korea.

LMD:  Since it's being shot here, should I assume that it's going to be in English, or will it be a mix like SNOWPIERCER?

BJ-h:  The main character is a Korean girl, but the supporting actors, there are some English-language actors.

LMD:  Are they both projects that you're writing?

LMD:  Back to HAEMOO for a moment.  What was it like to work with Director Shim in the capacity of producer versus as a writing partner?

BJ-h:  On Memories of Murder, we wrote together, and he was also one of the assistant directors, and I knew that he was having some difficulties becoming a director himself.  So, that was really the starting point of wanting to produce that film, was to give him that support so he could make his debut, but I feel like I didn't do a very good job.

But, actually, for a feature film debut, the Haemoo movie is quite tough.  It's not easy to shoot.  It's quite difficult a movie, because almost all the story happens on the ship, in the ocean. Do you remember Steven Spielberg after he made Jaws? "I will never go back to the ocean, again!" And he never really did go back.  Shooting on the water is really hard.  For a first-time director, shooting on the water must've been just really been a lot of difficulties.

LMD:  Well, you've sworn off producing, but I felt quite bad to have heard director Shim talk about the love story that he really wanted to make that kept getting turned down.  With the success of HAEMOO in South Korea, do you think you'd be able to help him get the love story made at last?

BJ-h:  It's true that I saw the original play and bought the rights and I thought it would make a good film, Haemoo, but I never saw myself as being the director of that because of the love story.  And actually, Director Shim has written several love story/melodramas and he's quite adept at telling those types of stories {so he thought he'd be appropriate for Haemoo}.  And {regarding Shim's love story} I'm gonna help him.  I know that script very well, it's a very nice script.


Producer Choi Dooho shared that Director Bong's impending film project is called Okja and they plan to film in New York next spring.  Choi will be on board as producer for both films mentioned in the interview.

Click here to read our interview with Director Shim Sung-bo for the Bong Joon-ho-produced hit, Haemoo, which made its New York premiere during Lincoln Center's New Directors/New Films festival.