First Poster Art For Wheatley's A FIELD IN ENGLAND 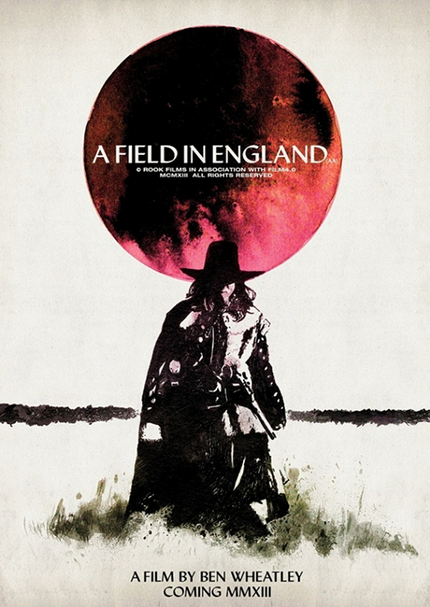 The director of Kill List and Sightseers is a busy, busy man and fans of Ben Wheatley can expect his next feature - A Field In England - to arrive in UK theaters sometime in 2013. We know this because the first poster art tells us so.

An English Civil War-set film that stars Michael Smiley (Kill List), Peter Ferdinando (Tony), Reece Shearsmith (The League of Gentlemen), Julian Barratt (The Mighty Boosh), Richard Glover (Sightseers) and Ryan Pope (Ideal). A Field In England follows a small group of deserters fleeing from a raging battle through an overgrown field.  As they are captured by O'Neil, an alchemist, they are forced to aid him in his search to find a hidden treasure that he believes is buried in the field.

Crossing a vast mushroom circle, which provides their first meal, the group quickly descend into a chaos of arguments, fighting and paranoia, and, as it becomes clear that the treasure might be something other than gold, they slowly become victim to the terrifying energies trapped inside the field.

I'll watch anything that has Reece Shearsmith in it

This is a really good site post, im delighted I came across it. Ill be back down the track to check out other posts.Hope you can also come with me to http://www.mmomesos.com.