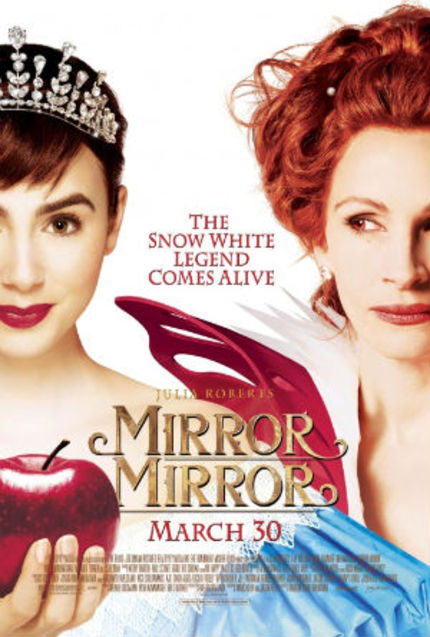 An action sequence featuring seven swordsmen on stilts in the snow confirms that it is indeed Tarsem (AKA Tarsem Singh Dhandwar), the director of The Cell, The Fall, and Immortals, who is at the helm of a family-friendly fairy tale.

In a post-modern age in which fairy tales have been deconstructed beyond recognition, it might be expected that Tarsem would be the one making an adult-oriented thriller out of a classic story recorded by the Brothers Grimm and made widely famous by Walt Disney. (The adult-skewed thriller, Snow White and the Huntsman, is yet to come.) Instead, Tarsem has applied his talents to a film that children of a certain age may well loooove and adults may easily tolerate.

As scripted by Melissa Wallack and Jason Keller, Mirror Mirror is a proto-feminist tale, a battle between two strong (royal) women for the heart of a prince and the good of the common people. The opening narration by The Queen (Julia Roberts) is filled with snarky digressions as it lays forth a different narrative than the one told by Disney in 1937.

The Queen asserts that the story is about her and not Snow White. The Queen arranged for The King to, er, disappear, and with him out of the way, she's not about to let Snow White's beauty and compassion displace her bored but comfortable royal reign. The Queen gets ... lonely ... so she'd like someone new to be her husband for a while, until she grows bored of him and makes him disappear. (Or so I assume, since it's not spelled out that way.)

A potential new mate arrives in the half-dressed form of Prince Alcott (a very game Armie Hammer), who crossed paths with bandits -- the seven swordsmen on stilts -- as well as Snow White (a very effective Lily Collins). Snow snuck out of her room at the castle to see how the common people are doing under the Queen's selfish reign. It's love at first sight for Snow and the Prince, but many obstacles must be overcome before true love can bloom throughout the realm. 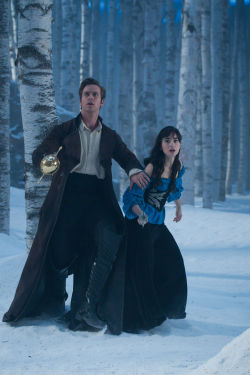 Referring back to the introduction of the dwarves on stilts, the scene begins as a horse-drawn carriage is beset by mysterious figures who appear to be very tall and menacing, until it becomes apparent that they are all on stilts and incredibly agile in the sliding snow -- and then they perform gymnastic stunts and logic-defying jumps and falls and recoveries and it becomes ridiculous, to a point that is disconnected entirely from reality.

Ah, yes: Because it's a fairy tale.

And then the scene becomes incredibly silly and goofy to watch, and there's nothing to do but laugh, and the tone is set for what follows.

It's not anywhere near as dark and violent as the Brothers Grimm version from the 19th century; this fairy tale is intended for the light entertainment of children. It manages to do so without resorting to potty humor (save for one visual reference) and without insulting the intelligence of adults.

A multitude of corny jokes are scattered throughout, bolstered by occasional ribald one-liners aimed at older folks, often delivered by Nathan Lane as Brighton, the Queen's loyal assistant. Roberts is never truly threatening, just kind of mean and selfish. It's very much a star turn for Roberts, whose concerns as the Queen about her beauty in comparison to Snow White appears to be misplaced; they both look radiant, and the script never explores the idea that physical beauty is only skin deep.

On the plus side, Snow is a much more assertive character; she's not waiting for her Prince to come, she's keen on taking care of herself. Collins, who has seemed uncertain in past roles, comes into her own here. She still doesn't exactly command attention, but she has the ability to waft through scenes and add to them by her presence.

The bandits turn out to be the seven dwarves, an admirably multi-ethnic wild bunch. They accept Snow into their home in the forest after she is forced to flee for her life, and offer her training so she can join them in their banditry; she agrees only if they steal solely from the Queen and return the money to the people.

Their antics are amusing, but not as amusing as the extravagant costumes by Eiko Ishioka, who further expands the possibilities for cinematic headgear. Ishioka, who colloborated with Tarsem on each of his films, passed away in January, so Mirror Mirror stands as a fitting testament to the designer's very special gifts.

While no one will leave humming "Whistle While You Work" or "Some Day My Prince Will Come," Mirror Mirror finishes up with a musical number that may be anachronistic, yet fits perfectly with a modest fairy tale that entertains, even if it doesn't enchant. 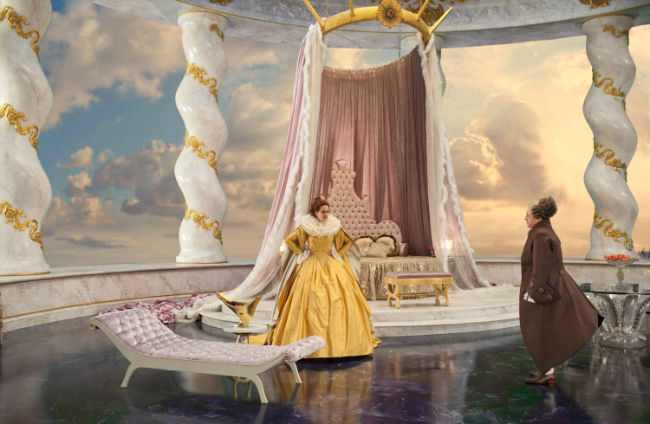