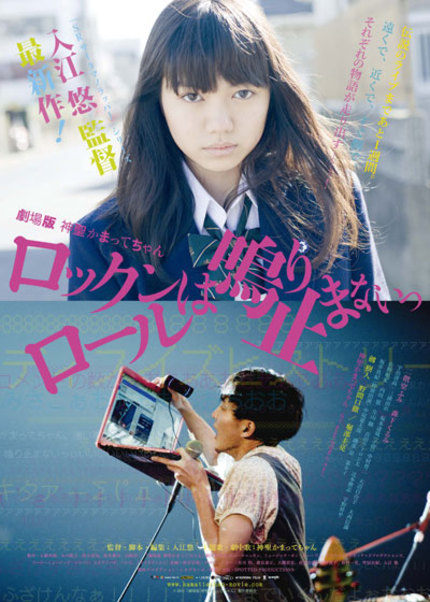 The film starts out with Noko, a lead singer of Japanese metafunk band Shinsei Kamattechan, on stage, singing while holding a laptop in front of him. With fans' comments flying across the live streaming images of the concert in the background, Noko sings off key, accompanied by childish pop melodies and loud guitar. His voice is awkward and powerful at the same time. Unlike the group's less than rock star attire and cheerful sound, their lyrics are often dark and borderline weird.

Yu Irie, who graced last year's NYAFF with a pair of sleeper hits, 8000 Miles and 8000 Miles 2 about Japanese wannabe rappers and the suburban ennui, comes back this year with a decidedly mature film, Ringing in Their Ears, featuring aforementioned, Shinsei Kamattechan.

Taking place over a week building up to Kamattechan's big concert, Irie skillfully weaves the trials and tribulations of several Chiba-ites into a funny, touching film. Kaori (Kurumi Morishita) is a struggling single mother doubling as a nightclub dancer and a cleaning person to bring up her forever-glued-to-a-laptop, kindergartener, Ryota. The boy, being a big Kamattechan fan, gets into trouble when he teaches his classmates a disturbing song, obviously influenced by the band:

I want to live/I want to die/Either way is fine, ma, ma, ma, ma
I want to fade away/I want to die/Neither way is fine, ma, ma, ma, ma
A high school senior Michiko (lovely Fumi Nikaido) clashes with her parents because she wants to be a professional shogi (Japanese chess) player instead of going to college. Then her boyfriend who'd introduced her to Kamattechan's music, leaves her for the more conventional college-bound girl. The band members, with the exception of reclusive (apparently in real life too) Noko being AWOL until the concert, play themselves as they rehearse for their big concert, while their conflicted manager (Mikito Tsurugi) hesitates to break the news that they are getting picked up by a major label and about to become a sellout.

It makes sense that Irie, who demonstrated the knack for channeling the disaffected youth in his previous efforts, is the one showcasing this Chiba based (like 8000 Miles 2), web savvy, word-of-mouth, indie rock phenom. But Ringing in Their Ears is not just another publicity tie-in or fanboy movie. It stands on its own as an affecting narrative. It just happens to have kick-ass music too. Irie's nuanced, minimalist approach is never on the nose about the issues - shut-ins, outcasts and the generation gap. He conveys all those things through likable characters and the spirit of rock'n'roll without being showy or cocky. Ringing in Their Ears will satisfy music fans and film lovers alike.

Ringing in Their Ears will be screening as part of the 10th annual New York Asian Film Festival in conjunction with Japan Cuts 2011 on Thursday, July 7th and Monday, July 11th. You can find out more information at the NYAFF website and Japan Cuts website

Dustin Chang is a freelance writer. His musings and opinions of the world can be found at www.dustinchang.com