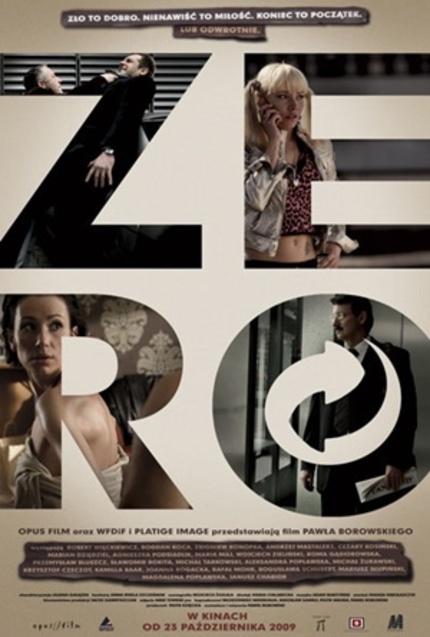 Is Poland's Paweł Borowski the next György Pálfi? Or, to put it in terms that more people may be familiar with, is Zero the next Hukkle?  The answer is not as simple as a quick yes or no.

The structural similarities between the two films - both of which are essentially 'following' movies more interested in relationships and connections than in typical plot points - are obvious to the point that it would be shocking beyond words if Borowski was not at least passingly familiar with Pálfi's debut.  So, on that level, yes.  Nobody has really done this sort of thing since Hukkle and Borowski does it so remarkably well that the comparison is complimentary to both film makers.

But the tone of Zero, and the ultimate aims, are quite different.  The look and feel - both of which are quite integral to the underlying themes of the film - are polished and clinical, a stark contrast to the raw and organic qualities of Pálfi's film.  Hukkle is a playful little piece of work, Zero not at all so.  Hukkle is - at least on one level - a story of community; Zero a story of isolation.  The form may be similar but the underpinnings completely opposite.  So, on that level, the answer is very definitely no.

But here's the thing.  Similarities and differences to other films put aside, Zero is an impeccably crafted piece of work, one that announces that the paradigm shift that has loomed just over the horizon for Polish film for some time is now upon us with Borowski the first significant player in what will very likely prove to be an ongoing wave of intelligent, meticulous, genre savvy work to emerge from the one-time leader of the arthouse wave.

The film opens in the office of a powerful business man.  The lines are cold.  Geometric.  No room for disorder as he pops a pill and sets his steel-ball executive toy a'clacking. He picks p the phone and dials. On the other end, a man who could not be more different.  Rumpled.  Disheveled.  Seemingly living out of his van.  About to be hired to prove that the business man's wife is having an affair. And off we go, the camera now following the investigator - at least until he encounters someone else in his travels at which point the camera again changes track, the cycle repeating again and again every time the a scene completes with the camera always following the last person to speak.

Zero tracks through a complete twenty four hour period in this fashion, the focus constantly shifting from person to person.  We meet newspaper salesmen, pornographers, doctors, cabbies, bartenders and more.  We never learn any of their names, instead knowing them only by what they do.  By what roles they fill in the world around them.  They could not be a more different group on the surface but what we quickly realize is that all of them - every single one - shares a sense of isolation.  Despite living in a city where they are in constant contact with people from all walks of life, every one of them feels completely alone.  Which seems fair enough on first glance until the film progresses and the lines of their stories begin to cross and connect in unsuspected, surprising ways and we begin to realize how intimately connected everything and everybody really is.

The risk with this sort of film is that by shifting so quickly between players it can become difficult to follow and connect emotionally with any of the key players - a risk compounded by Borowski's decision to not name any of them.  But this is a danger avoided thanks to the brisk pace and clarity of the edit combined with a tightly written script and detailed performances from all involved.  Though there is no central protagonist to the film we quickly are drawn in to the larger community.  All of these people - whether characters who appear only once or multiple times - feel remarkably real, as though their lives are continuing just off-screen somewhere even now.

Further strengthening the film are the technical values, Borowski, cinematographer Arek Tomiak, designer Wojciech Zogala and editor Magda Mikolajczyk working together as an incredibly tight unit.  For this sort of roving-camera exercise to work at all every part of the production has to fit together seamlessly and they absolutely do that here.  There is a remarkable rhythm and flow to the piece, an ebb and surge both to the characters and the action, the city and environments becoming every bit as significant as the human characters as the film progresses.  Much as is the case with the characters themselves, there is no one behind-the-scenes element that ever steps forward and demands that you pay special attention just to it but all of the elements fit together so well to support one another that they form a whole much greater than the sum of their parts.

A film that both challenges and rewards its audience, Zero is a remarkable debut achievement for Borowski, a film that would have been an ambitious challenge for any director never mind one making both his first feature and first live action film after beginning his professional life as a painter and animator. May this be the first of many.

Do you feel this content is inappropriate or infringes upon your rights? Click here to report it, or see our DMCA policy.
Christopher KezelosNick McKayReina McAndrewShelley HepworthAnthony ClarkeAnimationShortDrama