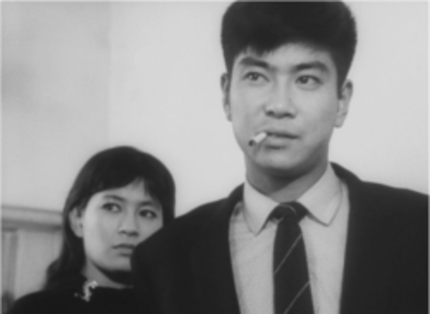 Like Rusty Knife, Koreyoshi Kurahara's I am Waiting (1957) is a talky star vehicle for Yujiro Ishihara, who once again takes the lead role and singing duties on the theme song. While the film has its strong points, I am Waiting is the weakest of the five titles in the Nikkatsu Noir box. This is not to say that it isn't good; it just pales a bit in comparison to the strongest films in the set.
The film tells the story of a restaurant manager and former boxer named Shimaki (Ishihara), who is ready to close down his business and join his brother Saeko on a farm in Brazil. Yes, Brazil. A beautiful woman on the verge of suicide (Mie Kitahara)  mysteriously shows up near Shimaki's sea-side restaurant. He brings her back from the edge, and slowly falls for her. As the story develops, it becomes apparent that Shimaki's and Saeko's pasts are tied together in dangerous ways.
It seems easy to keep comparing I am Waiting to Rusty Knife, but there is no getting around the similarities. Ishihara is essentially playing the same mopish character in both films, and even the character's back stories mirror each other. Perhaps the big distinction is that I am Waiting boasts a prominent female lead that gets equal screen time with Ishihra. Female characters figure heavily into all Nikkatsu titles discussed so far, but I am Waiting seems to be the only that really puts a woman at the level of the male lead. In fact, Mie Kitahara's character, who is hounded by men who want to control her, is more believable than Ishihara's world weary yet wildly naive boxer.
Kurahara's direction is straightforward. Save for occasional closeups, the two leads, who get a lot of screen time, mostly appear in proportionally framed shots. Spurts of action break up the talking (there is a lot of talking).  I am Waiting doesn't really feature heavy manipulation of light and shadow until the third act. Instead, much of the black-and-white cinematography is low-contrast with dominating grays and whites occasionally accented by bolts of blackness (i.e., black clothes). In an early scene, the leads take a walk by body of water, and the contrast is so low they simply appear as black silhouettes.
Tweet Post Submit